Canoe Blessing and The Busso Regatta

The Pai Nae'a
The Mandurah Outrigger Club members recently refurbished one of their old canoes and then held an Hawaiian blessing and naming ceremony before launching the canoe at sunset for it’s first paddle. The club decided to name the canoe after Mandurah’s famous dolphins which regularly play with the canoes during training in Comet Bay and have become the unofficial mascots of the club. This connection with the dolphins is also reflected in the clubs logo, so it was very was appropriate to name the refurbished canoe the ‘Pai Nae’a’, which is Hawaiian for ‘Surfing Dolphin.

The Pai Nae’a was put straight to the test two days later at the Busselton regatta and it must have been a good omen of how the day would go for the Mandurah club because as the canoes were being launched for the first race a dolphin was spotted cruising through the start line just off the beach. From there it was a clean sweep for Mandurah in every race, the Men’s 10km marathon, Women’s 7km marathon, the Mixed 5km marathon and 500m sprint. The club finished the day taking out the Champion Club points competition and winning “The Jetty” perpetual trophy. A camera was mounted on the Pai Nae’a for the Mixed Marathon and a short video of the race can be seen here.

It’s been an awesome start to the season for the Mandurah Outriggers, they are now undefeated in every race so far. They won both the Bridge to Bridge Race and the Bay to Beach marathons in Perth and dominated the 30km Dallyellup Challenge in Bunbury recently winning by over a kilometre. Their next challenge is the Cottesloe Outrigger Club’s regatta held on the Swan River on 13th February where they hope to continue their winning form. 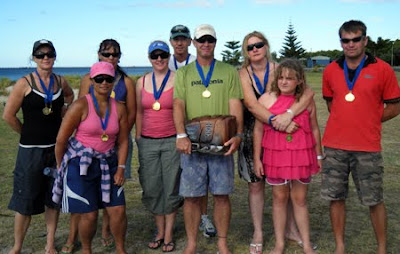 MOCC paddler with their medals and "The Jetty" trophy.
Posted by Bluedge at 10:57 AM