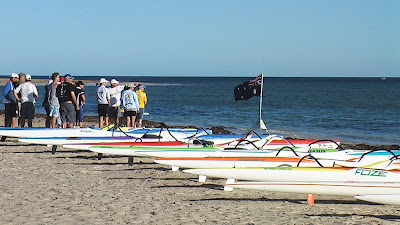 After another strong showing at our own regatta last weekend we now have an unassailable lead in the points standing to decide the State’s Champion Club for 2009. With one race to go for the season we can’t be beaten.

In the OC6 marathons we again dominated winning both the Men’s and Mixed division. The Women’s division again provided a nail biting finish with a collision between the leading canoes from Fremantle and Cottesloe 200m from the finish. This allowed our Mandurah girls to race up from behind and nearly steal the race, they hit the beach at the same time as the Fremantle crew and were only beaten in the foot race up the beach to the finish line. Cott won the race.

The Mandurah Outrigger Club would like to thank all its volunteers and support boat drivers that helped us out on the day, we couldn't have done it with out you. We would also like to thank our sponsors who donated prizes on the day including, Fast Fluor & SKM, Mandurah Ferry Cruises, City of Mandurah and Outrigger Connection.

The only race left for the season now is the gruelling Geographe Crossing, a 60km race from Bunbury to Busselton on the 28th March. This race is unique in that a team has 12 paddlers that are rotated in and out of the canoe from a support boat. The support boat drops paddlers in the water in front of the canoe and as the canoe approaches, a number of paddlers in the canoe jump out one side and the paddlers in the water pull themselves from the other side into the canoe to replace them. This happens about every 30mins and the winning crew will complete the race in around 6 hours. Mandurah will be running a mixed crew of 6 men and 6 women in the Mixed Division. Go Mandurah!