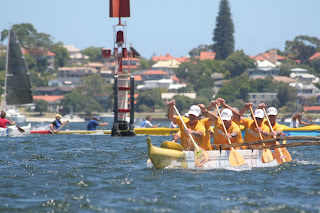 The Mandurah Outrigger Canoe Club have continued their season winning performance with a clean sweep of wins at the latest regatta held on the Swan River last weekend hosted by the Cottesloe Outrigger Club. Not only did the Mandurah paddlers win all the OC6 (six person outrigger canoe) races, the club also took out the champions club trophy for the day and consolidated it’s place on top of the ladder for champion club of the year.

The day started strongly for Mandurah in the OC1 (one person outrigger canoe) events with paddlers placing 2nd & 3rd in both men’s and women’s events. Mandurah’s strength comes from training and paddling on OC1s this showed with mandurah paddlers filling most of the top five places in both races.

The first OC6 event on the program was the Mixed Mini Marathon over 5km. Mandurah showed the depth of paddling ability by taking the lead from the start and extending it over the length of the course to win by 100m. The crew consisted of Linda Mestrovic, Terry Russell, Mac Nichols, Dario Mestrovic, Mel Rei and Julie Bartley. Mandurah’s second mixed crew finished a strong 5th.

It was now the men’s turn in the 10km Men’s Marathon. Again the Mandurah boys got out to an early lead but were chased hard by Cottesloe and Fremantle. The men’s crew of Terry Russell, Dario Mestrovic, Mac Nichols, Ian Campbell, Max Butler and Colin Bartley made a good turn at the half way markand  stretched their lead over the Freo crew and finished strongly with a 75m lead.

The last event of the day was the Women’s 8km marathon and proved to be the most exciting race of the day. The Fremantle Doctor was now blowing hard and the girls had a 4km up wind leg from the start. The three crews of Fremantle, Cottesloe and Mandurah exchanged the lead a number of times heading up the course before Cottesloe and Mandurah got a small jump on Freo. With only 2km to go Julie Bartley steered the Mandurah canoe behind and to the inside of the Cott canoe and got the inside line for the last two rounding marks. Having the inside line gave the Mandurah girls all they needed to lift and go past the Cott girls and win by a canoe length.

With 3 regattas finished and 3 to go, Mandurah now sits on top of the ladder. Their next regatta is a sprint series on the 21st of February and then they will host their own regatta here in Mandurah on March 7th. The last race of the season is the gruelling 6okm Geographe Classic from Bunbury to Busselton at the end of March.