The Mandurah Outrigger Canoe Club continued our season opening winning form with a convincing win in the Mainpeak Bay to Beach 17km marathon held in Perth last weekend. The Bay to Beach Marathon is an annual event on the paddle circuit attracting approximately 200 competitors on ocean skis, surf skis, kayaks and outrigger canoes. The course started in the Swan River at Mosman Bay and headed down river, out through Fremantle Harbour and into the ocean where it swung north and followed the coast finishing at Cottesloe Beach.

There was a strong turnout from all the outrigger clubs with 8 OC6s competing with mixed teams of 3 girls and 3 guys in each canoe. After a collision with West Coast at the start the Mandurah crew found themselves back in the field with all the work to do, so after settling down after the bingle they started to work their way back up the field. By the time they had reached the Fremantle Traffic bridge they had their nose just in front of the Fremantle Outrigger Club crew with the Cottesloe crew right behind them. Once the Mandurah crew hit the open ocean and headed north they used the following wind and waves to their advantage and pulled away from their pursuers. They finished the 17km course in 1hr 26min 48sec, a comfortable 50 seconds ahead of the Fremantle crew.

Posted by Mandurah Outrigger Canoe Club at 9:09 PM No comments: 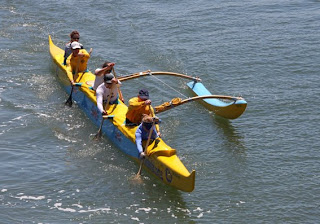 The Mandurah Outrigger Canoe Club started the season with a bang on the weekend. Our first race was on Saturday in the Spirit Mandurah Classic Ocean Marathon, a 12.7km marathon from Dawesville to Halls Head. In the OC1 division it was a clean sweep for Mandurah with a 1, 2, 3, finish for Terry, Colin and Max in that order. Dario and Linda took out 2nd place in the OC2 division and Julie took out 2nd in the women's OC1 division.

On Sunday we all headed down to Bunbury to the Wave Masters Regatta, the first Grand Prix Regatta of the season. First up were a couple of short 2km OC1 races. Linda finished 2nd in the Women's Division and Mel finished 4th for Mandurah. In the Men's OC1 Division the Mandurah boys almost pulled off a repeat of the previous day with Dario finishing 2nd, Terry 3rd and Colin 4th.

The first of the big races was the OC6 Mixed Division 6km Marathon (see photo above). The line up of Linda in seat 1, Terry in 2, Dario 3, Mel 4, Colin 5 and Julie in 6 worked well and we soon settled down and found our groove and slowly pulled ourselves into the lead with some nice steering by Julie around the first mark. From there it was just a matter of maintaining the pressure as we extended our lead and won convincingly.

In the Women's OC6 8km Marathon both Julie and Linda of Mandurah paddled with the Cottesloe Club to make up numbers and had a great race to finish second by a canoe length to Fremantle. Mel filled in with the Busselton crew who finished 3rd.

In the Open Men's OC6 marathon we were short two men for the race and with no extra men available from other clubs we grabbed two women from West Coast Outrigger Club and put them up the front of the canoe in 1 and 2 seats and told them, "just go as hard as you can, we'll back you up!" Dario, Terry, Ian and Colin made up the rest of the crew. After a great start we were up with leaders as we left Koombana Bay and headed out around the sea wall into open ocean, with the inside run going around the sea wall we grabbed a canoe length lead. With another good inside line approaching the the half way buoy, we slipped around quickly avoiding the pack and jumped to a 4 canoe length lead. From there it was just a matter of staying focused and holding on if we could.  Cottesloe was chasing hard and pushed us all the way to the finish but we held on win by 3 canoe lengths. It was an awesome effort and a very exciting race. Some of the all male crews must be scratching their heads after being beaten by us with two women in the crew

It was after a huge weekend of paddling for the Mandurah Outrigger Canoe Club and well done to all those who paddled. The club also managed to win 3 out of the 4 raffle prizes on the day as well!

Posted by Mandurah Outrigger Canoe Club at 8:14 AM No comments:

MOCC at the Boat Show

The MOCC was lucky enough to be allowed a patch of beach at the Mandurah Boat Show over the weekend to get us some exposure for our sport both here in Mandurah and in Western Australia. We answered lots of questions and even picked up a few new paddlers. Thanks to Premier Events and the Mandurah Boat Show for allowing us to participate and thanks also to the MOCC members for their help.
Posted by Mandurah Outrigger Canoe Club at 10:29 AM No comments:

After the success of our RAW Day we are going to put on a day for the guys. The MIA (Men in Action) day will be held at our club house at the Old Sailing Club Halls Head on Saturday 25th October at 3pm. For more info and to book in contact Wendy Cole wendy.cole@mandurah.wa.gov.au
Posted by Mandurah Outrigger Canoe Club at 10:25 AM No comments: 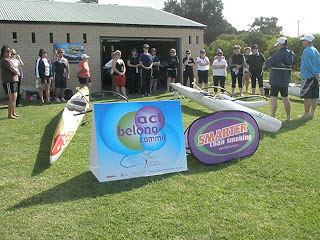 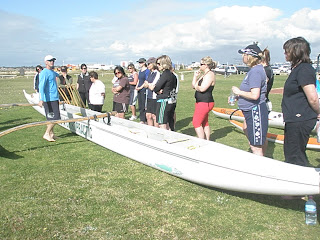 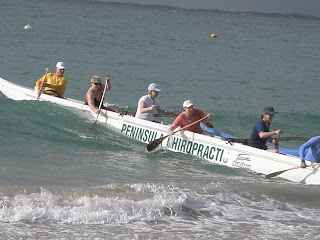 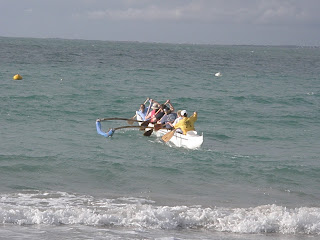 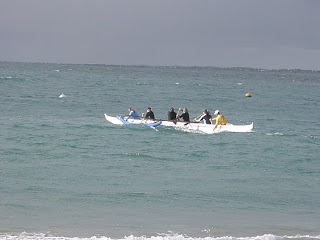 We had a great day last Saturday with our first RAW (Real Action Women) Day organised by Wendy Cole the Physical Activity Officer from the City of Mandurah. Twenty very brave ladies came down in the blustery conditions to challenge the shore break and give the sport of Hawaiian Outrigger Canoe Paddling ago. The conditions weren't very 'Hawaiian' but the girls had a great time and we hope we'll see them come back and try paddling with us again soon.
Thanks again Wendy for organising this.
Posted by Mandurah Outrigger Canoe Club at 9:40 AM No comments: